Evidence reveals Endiscopic Thoracic Sympathectomy (ETS) in a fully informed individual significantly improves the quality of life in most patients , however about 2-4% can regret the operation because of any unwanted side. 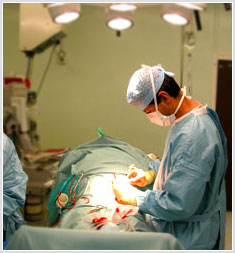 The decision to operate for these distressful conditions must be weighed up against the risk of the potential complications and side effects associated with surgery. This can only be decided on an individual basis. Traditionally ETS surgery is irreversible as the cut nerve does not re-grow. However there are new techniques which involve clipping of the sympathetic nerve. This may have some potential benefits if the side effects are too severe as ETS can then be reversed successfully in 20-30% of cases. ETS surgery is contra-indicated in patients who are obese or who have suffered from significant chest disease.

This procedure is not indicated in elderly patients or patients with cardio-respiratory disease or who have had previous chest surgery. 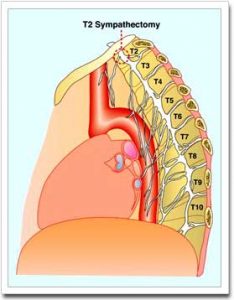 This is “key hole” surgery. This procedure is performed under a general anaesthetic. Two small cuts are made in each armpit 0.5cm in diameter. The sympathetic nerve is divided. The wound is closed with dissolvable sutures. The scar is minimal. The procedure lasts approximately 40 minutes. A post operative chest X-ray confirms full lung expansion.

Often there can be some sharp pain around the wounds and sometimes the upper back, although this soon wears off. Return to work can be as little as 2 days post surgery, but the time can vary depending on the individual. Return to sporting activities can take up to two weeks.

Complications and Side Effects of ETS

In my own experience no life threatening complications have occurred.

However, as the “key hole” surgery is performed in the chest there is always a possibility that the chest may be opened in the event of bleeding. NO OPERATION can ever be guaranteed to be 100% safe anywhere. Very rarely there may be an air leak from the lungs which may require a suction drain.

A few patients have prolonged pain or numbness in the arm. Permanent paralysis should not occur.

Horners syndrome occurs in our centre significantly less than 1%. Horners syndrome is a slight drooping of the eyelid and a small pupil but no visual impairment. If it were to occur it is temporary in most cases but can remain in about a fifth of those cases. Wound or chest infection occurs in less than 5% of individuals.

One side effect is excessive dryness of the hands. This may require use of
moisturising creams. As the sweating is reduced from the head and neck
approximately 80% of individuals complain of compensatory sweating elsewhere in the body such as the abomen, legs and feet. This is the body’s way of keeping the internal temperature neutral at 37°C. The degree of compensatory sweating varies upon the individual. Gustatory sweating, which is sweating induced by smells and tastes occur in up to 30% of individuals but very few regard this as a major problem.

Although some patients may feel general fatigue, physical performance has been shown not to be reduced on stress testing despite the heart rate being reduced by 10%.

For further information or to arrange a consultation or to discuss your needs, please call:

or complete our enquiry form here

Consult with a specialist